This is a post for Cold's Gold Blogging Carnival, check it out for other great responses!

I'm sure you all are familiar with Nev from the blog Auction House Addict.  Yesterday she released an idea akin to the "20 days of WoW" where bloggers would write responses to 20 prompts about WoW, but with a creative spin for us gold makers, "20 Days of WoW Goldmaking", and I am going to take part, because I think they are good prompts that will provide an introspective look into my gold making.  I am going to be doing this along with my normal posts on any given day, so you won't be missing out on anything else because of this.

Without further ado: Day 1 - When did you start gold making & what triggered it?

Wrath & Desperation.
That's the one word answer for each of the two questions.  This is a cautionary tale.  I've been going back and forth as to if I should ever tell this story on my blog, because it might have a bit of a negative reception in the community, but with the 20 days going on, it seems like the best time to tell it.  So it was in Wrath of the Lich King, and I was the Guild Master of a semi-serious guild.  We were doing ICC when it happened, not pushing heroic progression or anything, just 10 man regs.  I was making gold, but just to sustain my raiding.  I always had more gold than most of the people in my guild, but never put serious time into it.  This is where things all went sour.  At the time I was in college, and being a "poor" college student my budget didn't have the $15 a month I needed to put into WoW.  This is when I had my brilliant idea, that my WoW habit should pay for itself, and I looked into selling gold online.

My Income Method
At this time, for those of you that remember, Primordial Saronite was at it's peak.  Since I had an army of 80 alts, I was able to get a ton of it every week.  I used my Emblems of Frost from all my characters to buy these every week and resell (among other standard things, JC, Tailoring, BS, etc.).  I made a lot of gold, and at the time I could get over $1 per thousand gold.  Disclaimer: NEVER EVER EVER DO THIS.  Unless of course you want to feel the wrath of the ban hammer!  So I found a website to sell my gold, and set up a shady transaction.  It was one of the scummiest feeling things I ever did in game.  I met a level 1 in Booty Bay and traded them 40k gold.  It was like a WoW drug deal.  I felt terrible, but they actually payed me (which I had initially doubted), and I could play WoW for 2 more months.    This happened a grand total of two more times before the inevitable happened.

Short Notice
In the back of my head this whole time, I knew I'd get caught.  I always just thought I'd get a 72 hour ban, and a final warning type of thing, and then I would stop. But when I got that email, my heart sank.  Account Canceled.  I just stared at the words for a while, reading the email telling me that I couldn't get my account back.  Ever.  Now yes I had been naive, but putting all that time into developing and maintaining a raiding guild.  My roommate at the time played WoW so I used his account to tell my guildmates what happened.  They were all shocked that I didn't tell them initially and said they would have helped me out if I had asked.  I'm not that kind of person, and that was neither here nor there, because at that point I had lost something I had invested months of /played time in, and I was really discouraged.

Bittersweet Return
After my guildies heard what happened, and GM had been passed to one of my Raiding Officers, I was pretty content walking away from the game at that point.  But a few members of my guild pitched in, and bought me Vanilla through Wrath, and one even RAFed me so we could get to 80 as fast as possible on my account, and it was by far the most touching gesture I've ever received as a WoW player.  I started an Orc Warlock (my previous main) and started the grind once again.  Below is a picture of my low level warlock compared to my ICC geared Lock, taken shortly after all this transpired.  The take away for me was making gold is fun, but trying to sell it to support playing it was a fool's errand.  From then on I had the gold making bug, and worked harder than ever to be on top of my game. 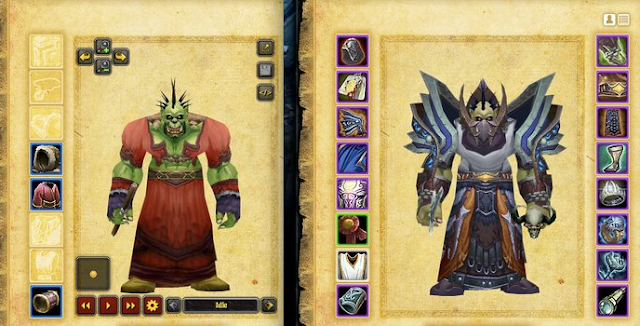