On the 4th day of Nev's 20 Days Gold Making she asks:
"Do you use a banker alt/guild? When did you start doing that & why?"

Yes and Yes!
My answer is yes to both questions.  I didn't have one until 4.3 and transmog being released though.  Previously I just set up my posting toon to be whatever my main was at the time (normally switches between warlock, DK, priest, and mage).  This makes it easy to post between doing things, and logging different characters to post things that aren't too troublesome for your main to post is annoying, and less likely to happen.   I still employ this method for the most part (except for glyphs + xmog), but when 4.3 came I knew I needed to change how I did things.

Reason's Got Nothing to Do With It...
When I first started doing transmog it wasn't too bad, but as my supply grew, my low number of empty bag slots on my main became more of a nuisance, and I wanted a toon that could keep tons of bag slots open, and have a guild bank for extra storage.  On top of that, if you ever played a toon that you post transmog on, you'll know that you start getting whispers about cutting people deals, and how much of a piece of garbage you are for posting gear for so expensive etc, etc.  So that's when my bank toon was born.  Using TSM Mailing it was easy to send all my xmog gear over to him and set him up for buying and selling gear.  I crafted him 4 26-slot bags, so right now he has 120 slots to shuffle gear from the mailbox to the Auction house.  Ideally I'd like 150 total, but I don't think that Blizzard will be accommodating this sort of behavior any time in the near future for xmog sellers.  Of course I've pimped him out, I think I've posted his picture on my blog before, but here it is again! 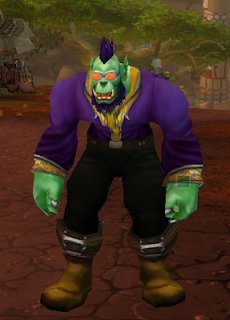