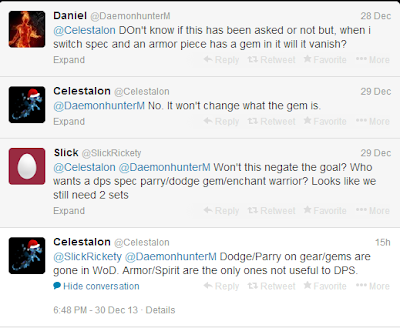 If you haven't already, there are only 2 Days Left to participate in my Yearly Review Survey to provide feedback that will go towards improving the blog in 2014!

Yesterday, the TSM team released a slew of updates for TradeSkillMaster, and among them was a new feature for the TradeSkillMaster_Shopping Module called Sniper. What the addon does is searches for recently posted items that meet a set of rules that you set up, and allow you to snag them before anyone else does. Before I release my video publicly, I'm posting the link on my blog for my readers as a sort of early release! Enjoy!

I've received a lot of responses from my Yearly Review Survey, but there's still time to add your input to help develop my blog in 2014!!

Hope everyone had a great Christmas, whether you celebrate or not, and enjoy the holiday season through the New Year! One of the comments (among many) I've received doing the Yearly Review Survey so far was "make your weekly review actually weekly". Fair enough.

Investments and "Investments"
So in the last 10 days I've gone up about 24,000g, which may not sound like much, but I also bought an Onyxian Drake for 52,500g, and a Dragon Kite for 25,000g in that time period. My intentions for the Dragon kite are to flip it. 25,000 is a decent sum of gold for it, but I'm willing to take the bet that it'll sell for much more. Currently I'm aiming for 50k on my server, but I'm considering transferring (learning and recaging) it to one of the higher pop servers that I occasionally frequent and see if I can flip it there and turn it into even more battle pets to bring back that may sell faster on my server. Going to stick with it for a few weeks on my server first though.

Hey everyone! It's that time of year, every thing is winding down, and I hope the holidays and New Year find you well! Last year, for the first time, I took a survey from my readers on things I could do to improve the blog in the upcoming year. I've implemented many of those suggestions since, and I hope they've come across well. Again this year I'll be asking you all to fill out the survey to give me feedback and help me make improvements in the upcoming year. One of the things I changed was the layout, as well as writing posts on many of the suggested themes/ideas suggested in my free response section.

The free response is some of the best data I can get from you as far as qualitative assessment of the blog, so if you have any ideas, please pitch them! I'm also doing a sort of demographic survey this year as far as how much gold people have, so I can see what my audience's gold range is. I really appreciate everyone who took the time to provide me feedback last year, and I would really appreciate it if you will take just 5 minutes to complete this brief survey.

I hope you all enjoy the holidays, it's been a great 2013, and I look forward to seeing you all in 2014, hopefully with lots of WoD!

How to REALLY Make Gold During Winter Veil

A lot of people associate things that go along with Winter Veil to be "gold making" items. Now I won't say you cannot make gold with these items, that would simply be a lie. But the smart gold maker does not need to get involved with Winter Veil, and I'll tell you why.

Small Eggs
Like the Netherweave Bag, Small Eggs are somewhat of a gold making legend during Winter Veil. This is mainly because it is accessible. Other items that are commonly used during Winter Veil can be found at this post by Marcus Ty, which I personally would advocate nothing in. So why are Small Eggs things of legends in WoW? Well every year there's a huge demand spike for these things around Winter Veil as they're used in 2 recipes for the season. I actually took a look at the TUJ Page for Small Eggs, and was not disappointed by the Quantity Available graph:

I've really enjoyed doing these regularly again the past few weeks, and I'm keeping it up, so expect the Weekly Lewt Reviews to continue.  This week I'm down 993,997 g.

How'd You Do That?
Okay so not all of my purchases this week were in my best interest as far as accumulating as much gold as possible.  This past Wednesday was my birthday, and when I got back from celebrating, I posted from my main, and checked the BMAH as I always do, and I saw Ashes of Al'ar sitting there for 35k!  A nice birthday present for myself.  Hung out till it was to Short, and then the bidding war began.  I was bidding against an Alliance toon, who once the auction hit 42k, had to run back and forth to the Mailbox to get his gold.  I would hope that someone in his position on my faction might have given up once they saw that I wanted it but he kept running back, and I decided to gank him.

It's been a pretty decent week gold making wise on my end, nothing super crazy to note.  I did end up making 10 decks for the DMF, and I sold one the night I turned it in, so off to a good start with sales.  Thinking it'll be my last round with those though, the expansion is dying, and I'm not sure how many more challenge mode gearers/alts are going to come up, and I've got quite the pile right now.

Barely Avoiding Disaster
This week I logged on my Alliance Priest for the first time in a while, mostly on a whim, because I felt like I hadn't posted my Alli transmog in a while, and boy was I right! 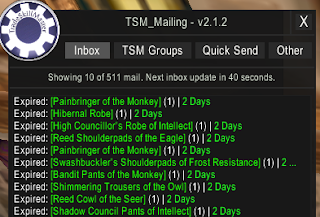 Yowza! My mail had been sitting in my mailbox for 4 weeks and was about to expire!  Good thing I checked that day because had I not I would have lost literally all my inventory Alli side, which is worth quite a bit of potential coin:

This guide is going to be extensive so buckle up. Macros are a great way to make your gold making more efficient, and this is going to be a guide to both create your own basic macros, followed by a compendium of macros that I use myself for gold making.

Creating a Basic Button Clicking Macro
Playing WoW, particularly using TSM, one clicks a lot of buttons to be as productive as we are. I'm not going to cover every button, but I'm going to go over how to find and macro any clickable button. The first thing we're going to utilize is WoW's built in Frame Stack. This tells us all the frames our cursor is currently hovered over, and we can find Button names from the list to make macros for them. Here's an example.

Type /fstack and you will get a window that looks like this: 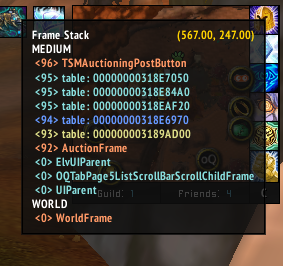 Right now I'm hovered over the TSMAuctioningPostButton, which I've just learned the name of! If I wanted to create a macro to click this button, I would just have to add a /click before the button name and voila:

You can do this with any button in game whether it be TradeSkillMaster, or quest hand in dialogues. This particular example is a bit unnecessary as TSM will bind this button to your scrollwheel.

I haven't done one of these in a while, but I have a decent amount to touch on that I think you all might find useful, so here it is!

Darkmoon Faire
While I'm sure many of you have given up all together on the trinkets from the DMF I've had some decent success selling them to what I'm assuming is challenge mode or proving ground players, especially the healing trink.  I have a LOT of cards in my guild bank, and with the prices I'm getting herbs from from my suppliers, it can't hurt to try at least one more DMF.  I'm pushing it I think, and it's not advice I'd give to anyone, but I have the gold to give it a try, which means, of course, that I'm going to!