How to Not Make Gold

Followers of my Twitter will already know, but two days ago I bought Invincible's Reins off of the Black Market Auction House.  It was a very strange experience for me parting with as much gold as I did, and I felt like it was worth writing about.

The Setup
My main, and toon that posts everything but transmog is a level 90 Mage.  Since I can teleport anywhere else I need to go, I have my mage's hearth set to the Tavern in the Mists so I can keep an eye on the Black Market Auction House.  Until today only two items that had sparked my interest on my servers BMAH were a Drake mount from Cata that I wouldn't have farmed, and a Brawler's Guild invitation.  Additionally I bought some patterns early in the expansion to flip, bought both for 20k each, sold one for 30k, and the other ended up selling months later for 15k (not the best investment).  In general, I was in a "I want to see how much gold I can get on this server" state of mind, and wasn't spending much.  Then Thursday morning when I checked the BMAH I saw Invincible's Reins.

I knew that an epic showdown would follow by some of the server's top gold makers, and I wanted to get involved.  I was sitting at 1,838,647 g, according to my Tuesday logging of it, so I had gold to burn.  I made the initial 20k bid on the Reins, and went about my gold making routine on my alts.  A hour or two later, the price had rocketed to 150k.

The Battle
From then on I decided not to be involved in driving the price up until the end of the auction.  No use wasting gold right?  Too bad I lost this mentality somewhere along the line.  A few minutes after midnight the auction went from long to medium, which meant the auction would expire shortly after 2am, my time.  Being tired is not a great condition to make rational decisions.  The price was sitting around 300k, and from what I could tell there were 3 active bidders still in the running (including myself), one other Horde (my faction), and an Alliance character.  With under 2 hrs left it was time to test the waters.  I placed a bid making it 320k, then walked away for a while.  Then the notification came while I was in a dungeon that I had been outbid. When I got back to the BMAH the mount was sitting at 400k.  Okay, he's not playing around.  The Hordie noticed me and told me he's almost exhausted his funds, and that he was making one last bid, making the price 420k.  The Alli went with another agressive bid, and rose it to 500k.  The Horde character told me he was out, and wished me good luck.  And then there were two.

The Grand Finish
There were now under 30 minutes left, and we had already reached half a million.  My next move was to push it to 520k.  Of course slightly thereafter he pushed it to 600k.  Feeling around for this guy's stop point was proving fruitless, and I decided it was my turn to do some pushing.  From 600k I jacked the price up to 750k, and then went around to all my alts, to send myself gold cap.  I had 1.8 mill to begin with, so I had just enough left that if this guy decided to make a last minute move, I could have cap on my character and not have to run back to the bank to beat him (unless of course he capped it out).  The whole thing was fruitless.  After I upped the price to 750k, he disappeared, and I sat next to the Auctioneer as time ran out.  It was then that it hit me.  I just spent almost half of my entire stockpile of gold.  The feeling was unsettling.  I hadn't been at this low of a point (~1.1 million) in over a year.  I started freaking out, almost hoping that I would be outbid, so I could keep my enormous pile of gold, but the auction expired with my bid at 750k, and I had a brand new mount.  I thought I would feel buyer's remorse in an extreme way, but I don't.  Whether I got it in ICC or not, my mount is one of the most badass available in game, the steed of Arthas Menethil himself, resurrected by the Lich King.  I miss my gold, but I very much enjoy my new mount. 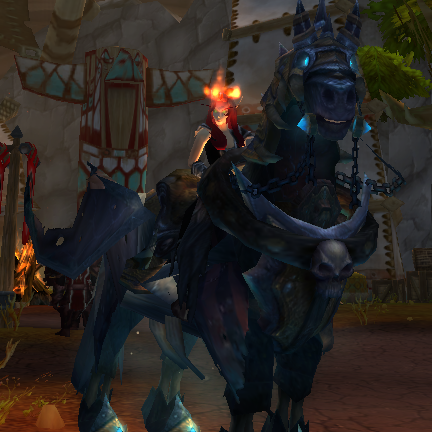