It's only been 7 months since Jim  did his last post using The Undermine Journal graphs as "evidence" for duping, and he's done it again.  First let me start by linking you to my response from his previous claim, well worth the read, one of my favorite posts I've ever written.

"Proof"
Now I will not be playing the role of a Blizzard fanboy and say these items are not being duplicated, I very much think they are.  I just believe that Jim's argument is not compelling, and I know that I definitely would not want him to be my lawyer based on his definition of proof.  All he provides is circumstantial evidence at best, while throwing the word proof around as if it's meaningless.

The Undermine Journal
Jim uses graphs from TUJ to highlight a part of his argument.  Below is the graph of the Jeweled Onyx Panther in question: 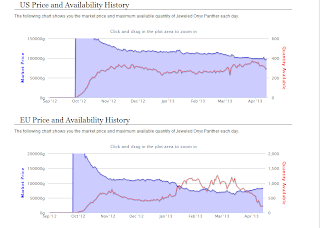 His point is that the EU one has some strange fluctuations within a time period.  This is true, the price hovers around 70k during the time in question, and taking the base cost as being at least 18k (price of Orb with discount) times 4, 76k should be the bare minimum that one could theoretically "pay" to craft one taking all other mats to be negligible (we wouldn't, but others do).  The graph does even dip into the 65k zone for a while, so fair enough, decent evidence.  Calling this proof however, does not take into consideration 5 possibilities:


There's much more you can read about the last, and most important point, but if none of these factors existed, there'd be some pretty solid proof for the aforementioned argument, as is though, it's just evidence of a theory, and a shoddy one at that.  Cheap Panthers do not imply duping.

Also if dupers had a method that worked on the EU servers, it would most certainly work on the US servers, and why wouldn't they capitalize to make the most $$$ before the method gets fixed?  "I don't know" was the response, so again evidence vs. proof.

So you like TUJ Graphs?
Here's one, Jade Spirit: 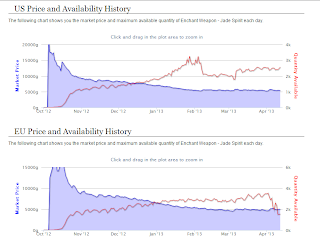 Would anyone like to suggest those US spikes imply a dupe?  The supply doubled in a month though, and it's cheaper than mats on my server! So what?  The graph of Dancing Steel also shows the same "abnormal pattern" in the US as above, but again, we know, this item has not been duped.  Just because we don't understand why certain fluctuations occur, does not mean it's because of duping.

Closing
In closing I'd like to use my point from last time to really drive this home.  The Crimson Deathcharger, a well known duplicated item, in the period of one month, in which Jim claims a "doubling" on only EU servers indicated proof of a dupe, the number on the Auction House went up 900% on the US servers, and over 300% on the EU servers, much more than this "proven" dupe.

Are these items being duped? Yes.
Does Jim use the word proof correctly? No.
Is Blizzard denying this like there's no tomorrow? You bet they are!!