My weekly review is a day late, but as of yesterday I was up 50k on the week, pushing my grand total above 2.5 million liquid gold!  It was a relatively boring week in gold making, but yesterday I purchased a guild bank which distracted me to the point of not getting my weekly review out, and I thought it would be pretty interesting to have as the main focus.

Yes, shenanigans.  So yesterday while milling some herbs on my scribe I notice in trade chat that someone is selling a level 24 guild with 5 tabs, and the stuff in the tabs.  Whenever I see something like this, I log right off, and hop on my unguilded toon to check out their guild banks to see if I can get a good deal.  So I whispered the guy, and I was the first one to bite (also keep in mind that this all worked out a lot better than it normally does).  I got an invite to the guild and asked for full permission to see the tabs, and he obliged.  I then used Sapu's amazing macro from The Consortium forums to approximately value the guild bank.  11.3k, not too shabby.  I did a few things that I also read on this guild bank purchasing thread on The Consortium, such as finding out his motivation for selling it (he was transferring servers with friends, and it seemed legit as he was only one left in the once active guild), and finding out how much he wanted for it before making an offer.

He told me he wanted 15k.  Yes, 15k for a level 24 guild with roughly 11k of mats in it, but of course, I did not offer 15k.  I responded with "There's not much of value in the guild bank how does 10k sound?"  He said that's good.  I took one last piece of advice I learned from that thread, asking him if he would  be willing to do half before and half after he transfered GM to me.  Not that it was some huge sum of gold I would mind losing, but he also agreed to this, and traded me the guild.  After sorting out all the tabs, getting vendor trash vendored, 24 hours of auctions, and CoDing mats at the cost I'd pay for them to my relevant alts, I now have 6k liquid on the alt, and about 7k in auctions, half of which are useful, and the other half are things I'm hoping will sell in a few postings.

So I'm only down 4k liquid gold for the guild at the moment, and I'm going to flip it pretty soon, my main decision being whether or not to get it to 25 before selling it (it's half way already).  More to come on that as it unfolds.

I actually flipped another item this week that's of note, just because I think that it's an interesting aside.  I got an in game mail from someone asking for a 476 piece I had on the AH for 5k (it was posted at 10k).  This actually sounded like a nice deal because I had it up for a while, and who knows how long they will even be in demand for with 5.3 inching it's way around the corner.  Being who I am though, I decided to test the waters.  I mailed him back saying "Really sorry, but I'm not willing to go any lower than 6,500" and attached them C.O.D. for 6500g.  What do you think happened?

Screenshots of the Week

Got a few screenshots this week of people being silly, or odd sales in WoW.

The first, a strange sale, 3x Enchanting Vellum, you won't believe the price.  It got accidentally thrown into a group I made when I used the word Enchant to move items into it, needless to say it's staying.

The next one is an odd interaction I had with someone from my transmog toon this past week, the item in question is this.

Last but not least, someone demonstrates a great way to convince me not to sell him something. 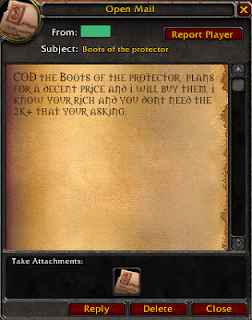 That's all for this week, hope you enjoyed my off topic weekly review!