This post is for Cold's Gold Blogging Carnival which will go live on May 11th, but I know I'll forget until the 12th if I don't come out with it now so here goes :-P.  I'll try to keep reminders up on my site so you can read all the other great posts when they come out.

This month's carnival asks: "What Was A Niche Market That You Were Suprised To Find Or That You Did Better Than Expected In During Cataclysm?"

Two markets that I really loved that were introduced in Cataclysm were Transmogrification and Mysterious Fortune Cards.  They are very interesting markets and fun to play with.  By far though, my favorite new market was the "Cataclysm Twink Market" brought on by overly powerful  level 77+ gear being introduced to low level cataclysm zones (80-81). 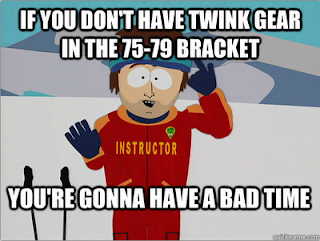 Why it's a Great Market
The reason why it's a great market to focus on is two-fold.  First and foremost, everyone wants the best gear for their character.  If you've done PvP in 75-79 bracket you'll know that without it, you're going to have a bad time.  The stats are more than double that available on even the best LK gear in the area, and gives a big boost to any character using it (even in PvE).


Second, the gear is not obtainable AT level 77.  Period.  You can't quest in Hyjal until 80, and you can't ENTER Cata dungeons until 78, and even at 78 you'd need to be carried because you cannot queue for randoms yet.  At 77 characters have no way of getting these greens other than randomly grinding mobs on an alt and hoping that their armor and stat type drop.  Not very fun or productive.  That's where I step in.

Methodology
Many people like the broader spectrum of this level range of gear, mostly 77-80 or 77-81.  I prefer 77 and 78.  My reasoning is again twofold.  People will want the twinked out gear as soon as they can get it, ie at level 77.  Second, even a level 78 or 79 can benefit from the 77 greens, if there is not the armor type/stats they want on the AH.  On the other hand a 77 can't use a piece of 79 gear because there's not what they need on the AH.  Also, at level 78 you can attain some blue pieces of gear, only 5 that are BoE, but they're deadly.  Agility daggers, an agility staff, and strength pants are my best sellers.

From there I buy any armor or weapons that would be remotely useful to players.  One thing to avoid like the plague is agility plate.  For a full list of things to avoid check out PW:G's post, about items to avoid when flipping twink gear.  In general for the 77 gear I'll buy anything 250g or under, and I sell for 499g99s99c.  For the 78 rare gear I buy anything under 500g and sell for 999g99s99c.  Over the long run I've had the same return as Jewelcrafting, as seen in my 1,000,000 gold post.

There is already on the beta sets for a similar market being added (83-84) and I hope it does just as well come Mists of Pandaria.