A lot of gold bloggers recently have been going over stockpiling for MoP, and while I'm not really full fledged into stockpiling mode right now, I figured I'd go over what I currently am looking for and what I'll be looking for in the future. 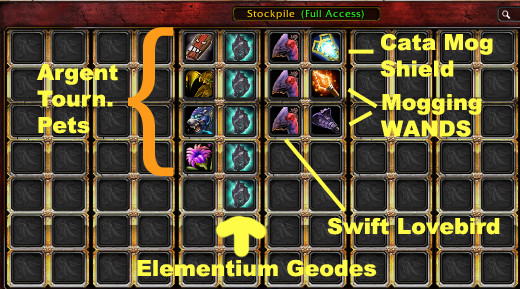 Pets
As you can see I have a decent amount of pets.  With the new pet battle (Pokémon) system coming out, pets are going to be a commodity in HIGH DEMAND in MoP.  People will want rare pets that not many others have.  To this tune I have been snatching up Argent Tournament pets that are below half my average server price, as well as Elementium Geodes.  The Argent Tournament Pets are pretty few and far between as is, not to mention that near the release of MoP, very few people will be acquiring more of them (if any) because they are exploring new content.  The Elementium Geodes are less than a 1% drop right now, and considering that Elementium Ore won't be farmed NEARLY as much, I'm buying these up at around 200-300g and putting them in storage for safe keeping!

Swift Lovebird
I bought these during the Love is in the Air event in WoW hoping to resell a few months down the road.  Not sure what will happen with these, but I have them. 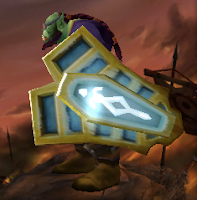 You may remember this shield from my post Auctionating Mogging Shields.  This is a very rare drop in Cataclysm.  Although it shares it's model with a 15% drop from Naxx 10, I think it will be a good seller in MoP regardless.  The reason I am going to hold on to these to sell until MoP is that even though they're rare now, they'll be EVEN RARER once people stop doing Cataclysm content as regularly.  When doing my mogging shields search on the AH I will buy this up at 500g or below and I'm looking to sell it in the 5k+ Bracket once Mists comes out.  A great inflation buster IMO.


Mogging Wands
As you may or may not know, in MoP caster's main weapons will be wands.  Right now I'm buying up a couple of models that I think look really cool.

The first pictured is the Torch of Austen.  I like this particular model because it looks like a torch as the name implies. I think that once casters have wands as their main weapon the wand transmog market is going to explode, and this is a great already existing BoE wand to get.

The second one I have pictured is Gwyneth's Runed Dragonwand.  Although you can't see it from my screenshot, the head of the dragon has flames coming out of it.  This wand SCREAMS MoP transmog.


I'm very interested in putting a list together of some viable transmog BoE wands, as they will be a new hot market in Mists, and who wouldn't like have control of it from the get go?


So I hope I provided at least just a little insight to my stockpiling, hope it helped you get some ideas, I will be posting more in the future on what else I'm stockpiling, and hopefully a wand mogging list!