My Idea
Well this is a strange scenario, and I've not personally had it happen previously.  My guess is they used the following method to "guess" how much gold you had by assuming the max you've held at 1 time is your current total.

Click any (other) player, and right click their portrait, and go to "Compare Achievements".  Go to the bottom Statistics tab on the bottom, then Character -> Wealth on the left hand side, you'll see something like this (click the image to enlarge): 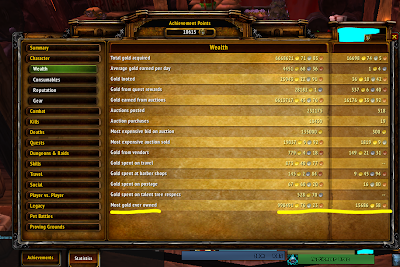 Now, if you look at the "Most gold ever owned" stat on my stats on the left side, not much is told by this.  I've had almost cap on this character, but that doesn't paint a picture of what I might have on hand right now, because odds are I've traded it to my other toons and it's irrelevant.

On the other hand, if I look at this random toon who I've inspected, the most he's ever held is 15,686g 0s 38c, this could very well be what he has on hand at this very moment, especially considering he's made ~16k from auctions.  Is this a fool proof method that will work for every toon? No.  But it's a good gauge to guess how much gold someone has if they're working their way up.

There may be other ways to do this, but this is the most simple and only way I know of in game that will let you guess semi-accurately how much gold someone has.