Today I'd like to touch on the topic of instant gratification in gold making.  Recently I've been getting a lot of questions asking what people should do in certain scenarios and 99.9% of the time I recommend adding 77 twink gear and daily transmog searches to their profession arsenal, and most people don't want to take the time to repost the stuff when the auctions expire.

Fun Facts
Yes, transmog gear and twink gear don't sell as quickly as raw materials you can farm, or cut gems for example, BUT they sell at a way higher profit margin when they do sell, and they take very little time invested if you use TSM.  Instead of spending hours maximizing your JC profit by doing the shuffle, you can do a quick scan of the AH, maybe spend 15 minutes accruing new supplies, and be on your merry way.

The one thing you have to know about this Cataclysm Twink gear is that although you may sell 1-2 items in patches, but when there's a new 77 who is fully aware of it, he's gonna splurge on all that you have: 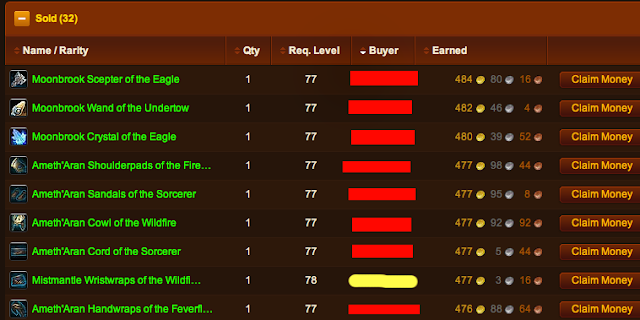 This sales picture is from one day, the red buyer is all the same guy, a 77 priest who wants to get the best gear that gold can buy.  I made 4,000g from this one character alone, and spent at most 2,000g on the gear originally.  Did I have to repost it a couple times?  Sure.  Is it going to sell in the long run?  Yes.  I always buy at (at most) half what I'm going to sell it for.  Even if someone is already in your market, and you can only pick up a few pieces, you will benefit from the other pieces on the AH.  People don't want one piece of this gear, it will make very little difference.  They want full sets, or as much as they can get, and your piece is (hopefully) included in that.

How I suggest doing it
If you have the space, make a level one toon dedicated solely to posting these types of auctions.  Get him/her some nice bags, preferably with 100 or more total slots (two full mail empties).  Post all of your auctions on 48 hour windows, and have another toon do the buying and send all the items to this toon.  Log your posting toon religiously every 2 days to repost your auctions.

You don't have to spend much time at all on this toon, just the reposting time, and it REALLY doesn't take that long if you know how to setup TSM.  This also avoids you being hated on your server for selling transmog gear at such high prices.  Doing a once daily search and once every other day posting with this stuff will get you a ton of gold.  I've been doing it this way on my own server and on the Alliance side I've made over 50k gold, and horde side I've made over 150k gold from this method alone .  I know it seems like a lot of work and that it wont pay off in the long run, but once you have a decent supply going (150+ items) you will be making sales every time you post, and it will become well worth it.