First of all let me give a plug for The Consortium, specifically Sterling who just released to the public his Enchanting Mastery Guide. Check this bad boy out. It's everything you could have ever wished for about enchanting and much much more!

Second of all let me start by giving a plug for The Drunken Musings #9 where I discussed in part my experience as of that Saturday of my connected realm, in the few days following connection. As always it was a great podcast and we were accompanied by the always lovely 8BitBruce, who has interviewed both GoblinRaset and I on his own podcast, so be sure to check that out as well!

The Beginnings
So after getting connected, trade chat was pretty crazy. People were all chatting with their new servermates, and of course "calmly" and "empirically" determining which server of the 3 was the best. It was the merger of Kalecgos, Executus and Shattered Halls. People started calling it KESh, but I think we should take the extra step and just call it KESha. This will be the first and hopefully last Ke$ha reference in my blog.

Anyway, the only thing that ended up being crazier than seeing trade chat actually active was the prices. 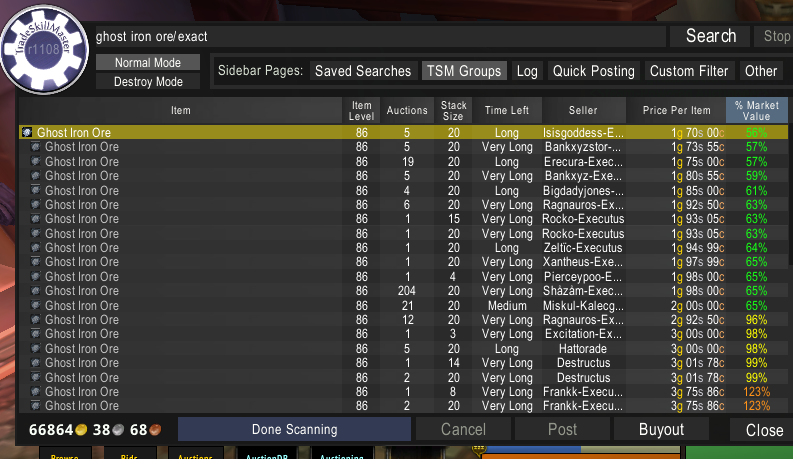 Previously GIO was in the 60-65g range, and I bought from farmers for 40g/stack. So I decided to take the plunge: 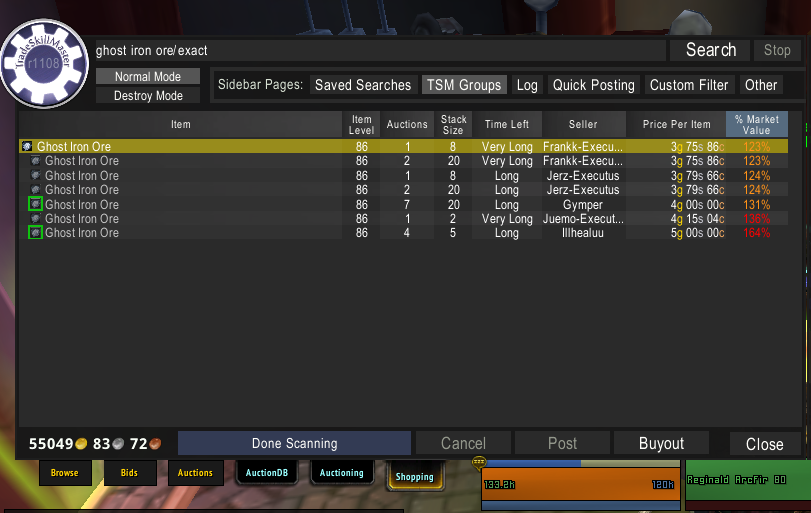 Pretty much cleared the AH of anything remotely cheap. After buying the 204 stacks in particular I figured what's buying a few of the lower 3's to increase prices for everyone else? I'm a real nice guy. Found similar deals on herbs and enchanting mats, but even after going on a spending spree by the end of my first day I was in the black: 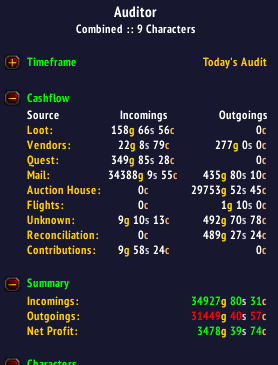 Pretty cool IMO, made a great deal of sales!

Still Low Pop!
Now my server is noticeably larger, and it's getting the feel of some of the larger economies that I've played on, but believe it or not, my new tri-server is still Low Pop (barring weekends maybe).

Now the economy in my opinion is much more like a healthy server's economy. In the first week since connection I made ~97,000g profit, which is actually only slightly higher than I was pulling before connections, but I've been doing a lot of buying during my inital week, as my stockpiles were pretty dismal. Anyway, have to spend gold to make gold!

Glyphs
So getting connected, I got a lot more glyph competitors, along with much more reasonable prices. Glyphs were dismal on my server pre-connection with glyphs going for ~500g, but if I pulled in 1k/day it'd be great. Now there's actually nothing terrible about this I suppose compared to selling 8 glyphs and pulling in 1k, but glyphs have never been a friend of mine. Anyway, I kinda said screw it on glyphs and haven't even bothered with the market. I know there's gold to be made, but my glyph strategy was not made for this size of a server, and the profit potential of changing it is not appealing to me at all. I will probably start reading up on what Stede and Selltacular have been writing recently about glyphs. They know far much more than I do about optimizing glyphs, and I will have to defer to their wisdom.

This actually makes me want a TSM module, or perhaps just part of the TSM addon itself that can sort things by Sale Rate. I would imagine doing something like If(SaleRate=0) Then(Remove from Group) would be such an amazing and fun tool to use! I digress.

Jewelcrafting/Item Enhancements
So gem prices took a major dive, but my floor on rares is still around 24g uncut, so there's always profit to be made here. Sales are crazy in this market, at least compared to what I'm used to. Other than my main competitor from my original server, there's maybe one other big fish that posts with TSM out there, so there's very little legitimate competition, and I often find that only half my auctions will get undercut in this market if he's not on.

Item Enhancements such as shoulder and leg enchants are doing okay, but Enchanting Scrolls are pretty damn ridiculous right now. I have to take some time and evaluate my new price points on this tri-server, getting accustomed to this change has been no easy task. When I rolled on a new server I started fresh with TSM and no professions, so it was easy to look at it as a separate entity. Now I've got all my professions and gold resources and have been thrown into a new environment where I already have a setup that's worked fine previously, but I'm starting to find flaws when I'm working on a larger scale. Now I'm not going to rework my groups the way Raset did recently, but I'm going to need to rework and reevaluate a lot of my operations for them.

Summary
So my server is noticably larger. As I predicted going into this, I think my experience was quite different from what I have heard others have, and that all server connections will be different. Some general trends will hold true across connections. In general a lot of my markets remained intact, and I will just need to refine my strategies and pricings to make sure my well oiled machine remains well oiled and in proper working function. It's holding for now, but just waiting to break! Will be updating as I progress as well, maybe with some of the logic behind how I changed my groups!