No I haven't left my server, but realm has been pretty dead lately, and when WowProfitz said he was moving to one of the highest pop factions in the US a few weeks ago, I had always planned of rolling a toon over there, and this past Friday I finally got around to doing it.  My main goal is to make gold on this realm.  It's just a fun side project, my main realm is slow now, and I've decided to take a break from it (not a full break though, still doing post scans and basic maintenance).

Day 1
So I rolled a Blood DK for quick queues, and got through the DK starter zone and to 60 on the first day.  I was really amazed by how quickly things sold on a high pop server.  I was selling my cloth I got from running dungeons, and it'd sell within the hour I posted it on a Friday night.  Something that I would probably need to repost multiple times on my main (low pop) server before a buyer came along.

Day 2
It was time to pick professions!  I initially decided to go with Enchanting/BS, because I thought Enchanting would be relatively easy to level with BS.  After looking at the markets, and thinking I might want a profession I can optimize before 90, I decided having a JC would be to my advantage, so I dropped BS in lieu of JC.  JC/Enchanting, the staple bread and butter of gold making.

After crafting the first ~100 levels of JC, I still didn't have enough mats to get enchanting to 75 so I started running SFK to get some greens/blues to disenchant (Enchanting 1-75 can be done solely by DEing items).  It was a pretty easy to mass pull the dungeon, I wasn't getting hit, even in the 60s, and I got a few stacks of Wool and Linen Cloth per run, so nice for some quick startup capital.

This was taking way too long, so I also transferred some battle pets from another server I was working on, where I don't really care about my gold total (was at about ~50k).  I was willing to take a loss on them as long as I had some capital on my main server.  I ended up transferring 2 level 25 pets, and they both sold, for a grand total of 10k!  Now I had some dough to level my professions!  I also leveled through dungeons to 65 (I had a slow weekend).

Day 3
With my new pile of money, it was time to start leveling my professions, and boy did I blow all that gold away as fast as I got it.  I rarely venture out on to new servers where I don't just focus on flipping, so leveling a crafting profession with limited gold did not come quick to me, in fact I blew it all.  Literally all 10k leveling my professions.  I have some surplus mats I'll be selling for gold, but I'm leveled up through Wrath now, and since my DK is at 68 that's as high as I can go until I grind out a few more levels.

Onward
Now I'm slowly leveling through BGs (taking the scenic route and enjoying it) while playing the AH.  I've exhausted my pet funds on my alt server for the time being, so finally to traditional gold making after selling a few more pets.

Last night someone in trade was selling a level 25 guild, so I quickly whispered and offered him literally all I had on hand, 10k gold.  He accepted, and this afternoon (literally just now) I've sold it for 25k!  150% returns on all my gold at once in < 24 hrs?  Can't beat that!

Below is the graph of my gold over time on the realm, as you can see I have not been able to curb my "I can spend whatever I want" habits I've acquired from having my millions on my main server, and I was constantly operating at close to 0 gold, tying most of my gold up in markets.  But this is what you should do, if you don't have your gold tied up in markets, it's just sitting there not making money.  Gotta spend money to make money! 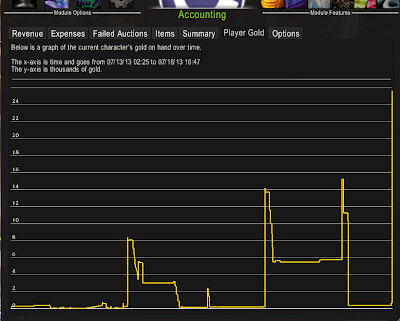