Pay Attention to What You're Buying!

Recently I added a vendor subgroup to my TSM Transmog List, because there were quite a few items on my transmog list that happened to be vendor items, that people were unaware of based off my list alone. As I was shopping later that week, I came across an item, Glorious Shoulders for 600g. At first I clearly recognized this item as the shoulders for Glorious Transmog Set, a very sought after "platekini" set for transmog. Seeing it for 600g I thought, what a deal! These pieces sell in the 10's of thousands, and these shoulders were only 600g!

Of course, I moused over the item to see it's DB Global Market value before purchasing, and I noticed something odd. The market value was 5k and it was in my Vendor group. Of course my first thought was "you can buy pieces from the Glorious set from a vendor!?"

I took to Wowhead, and if you were sleuthy enough to click my Glorious Shoulders link above, you'd know that the linked shoulders are nothing but!


Of course further inspection shows that these shoulders are indeed Mail as compared to their Plate brethren, and the name Glorious Shoulders is not what the shoulders of the Glorious set are called, they are called Glorious Shoulder Pads. Of course once I read about the Glorious Shoulders being sold by a vendor, I had to make the trip out, and see if I could snag a pair or two to sell to my lovely competition. I parked my never-played-alt (mining/herb, still 90) out at one of the two vendors, and loggws on occasionally to snag that and some other green transmog the vendor has to offer.

My competition won't know what hit them! Of course, they already got hit, but I hadn't realized it. It seems that prior to making my vendor list I had picked up 2 of these for 500g a pop (ouch). A few weeks ago, when I first made my vendor lists, I set the auctioning price to items in that "Vendor" subgroup to be 16% my normal global source, which puts it under the price range (20%) I personally suggest. As a result I sold these to a Xmog seller for over 600g each, which should at least pay for all my AH fees in between!

Of course as I was writing this post, I remembered my alt parked out there, and sent the items I had gathered over to my Xmog selling toon. As soon as I posted them for 16%, the same guy (orange above and below) snatched 'em all up, likely while running a sniper scan. 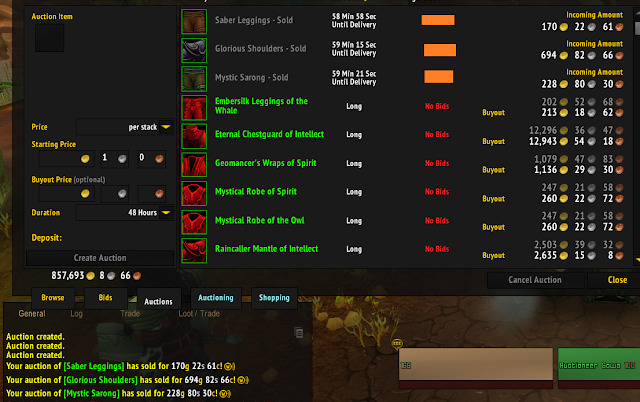 1,000g on a new server, and it  costs you less than 4g!! That would make one hell of a YouTube clickbait video title. I was also able to replicate these results on a server where I already had a 62 with flying, so my server is not just an outlayer, but I know some high pop servers will be flooded with these items already.

Lesson of the day, even an "expert" in a specific market can have gaps in their knowledge and not be 100% familiar with their products. Also, always keep up with the latest and greatest of Phat's Transmog Lists, otherwise it may come back to bite you! :-)