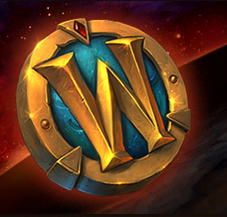 
What's interesting is that the buy and sell price set by Blizzard don't necessarily have anything to do with each other, which could prove problematic, but only time will tell. Just as an example, say as a seller Frank posts a token for 45k gold. Phat as a buyer comes along and the price has shifted down and he pays 40k for it. Frank is guaranteed the 45k gold selling price he posted it for, and 5k gold was generated in the transaction out of thin air. Now the question is, how much of a difference is Blizzard going to allow? Prices/tokens are also going to be regional, so this can generate some serious capital on backwater servers.

Some Neat Ramifications
One thing I'm looking forward to is possibly (haven't decided for sure yet) having a second account to manage my auctions more effectively. It's not something I've done in the past, and has always been something I was interested in, but I couldn't justify doubling my sub cost for it. Depending on what the price is of tokens in gold, and where it settles, I'm definitely going to try it out for a bit. I bought a few battlechests the last time they were on sale for $5, was thinking about doing a giveaway with them, but am definitely going to be using at least one for myself. May even start a 5 man multiboxing team. The possibilities are endless. At the moment I believe I have enough gold to pay for ~6 years of game time, or 3 years on 2 accounts, or 1.166667 years on 5 accounts....

There's a semi-interesting link I saw from @StedeUS's twitter the other day to this poll on MMO-Champ:


This is the price people would be willing to pay and the amount who would buy tokens to sell them. As you can see there's a bit of a disparity between those who are buying them from the AH and those who are Selling them after buying from Blizzard, which pushes price higher (if we assume this poll is representative, which is questionable). Considering that only 20% said they were willing to pay over 30k, and almost double said they were interested in buying, I can see price settling right around there, if we take this to be accurate, which again is not necessarily representitive of WoW's population or what will actually happen. The price willing to pay, if you graphed it, does show a nice exponential decrease though, although the top 2 categories are switched.

If you're interested in more reading there are a few interesting discussions going on over at The Consortium on this topic, you can find a discussion on what to stockpile for the WoW Token Drop here, and more throughout the forums.