I got very busy during the last few days of the competition IRL, and could not continue the log style of my posts, so the last 3 days are in a group summary form.

Final Days Combined Log (28-30)
Unfortunately, due to unforseen circumstances IRL, these last few days will require a lot of out-of-game attention, so I will not be able to maintain the log style of the previous posts. That being said I am liquidifying everything I possibly can on the competition realm, going through my bank and things I've been putting off, buying LS cooldowns to dump excess Trillium. Liquidating. Everything. Doing a lot of cancelling when I can to get those extra sales. Restocking gems as well, anything I can to turn an extra buck. Saw my main competition on just 24 hours before the deadline, and I did a compare achievements on him yielding the following: 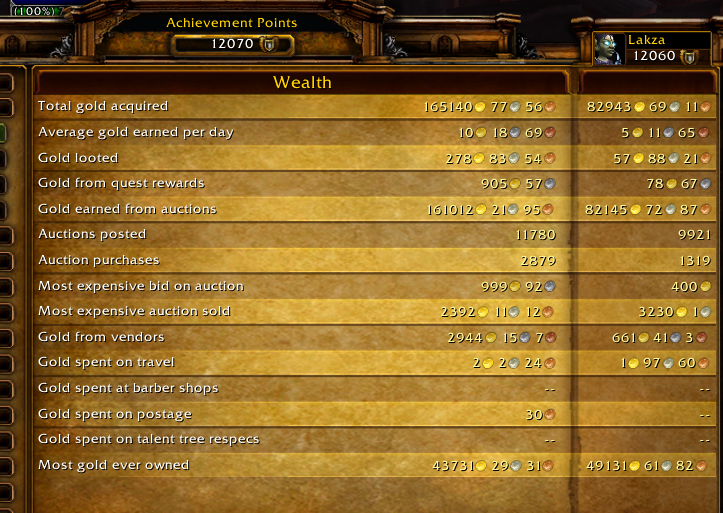 Now honestly, I feel that this guy is the only one who IMO will be competing with me for the two titles (most gold/most gold per hour). I'm not sure that anyone else has even been continuing on at this point, or is trying/playing at this level. So, comparing the numbers we see some interesting trends. One is that I've acquired roughly twice as much gold as Lakza. I'm very interested in this. From what I was seeing, he was very invested in flipping mat markets, and selling vendor items. This also tells me that he was making much better returns on his investments than I was, although again, I think my strategy was too long term. On our most gold owned, for one I'm assuming that we both currently were holding the most gold ever owned on our characters at the current time, which puts Lakza 6,000g ahead of me. I think that with persistance in this last 24 hours that I can overcome the gap and then some. I've been roughly earning 10k/day in the past 2 days, so getting 12-15k I'd feel comfortable in where I am, but it only means these last few hours are going to be essential in making my most gold title.

It really sucks, because I think it just took me too long to hit my stride, and given an extra week I could make over double what I have now, but there's no one to blame for that than myself. Throughout the 24 hours I was posting like a mad man whenever I got the chance and restocking/posting all my gem cuts in stacks of 5. At the end of the competition I decided not to go crazy and vendor all of my items as it would be a complete waste of future earnings that I plan to do on the server.

The final totals for the two winners were:

So I was able to make 18k in my last day, and Lakza pulled in about 7.5k, giving me the larger total, and leaving Lakza with the most GPH. Lakza and I were very close throughout the competition, and I could tell early on that he and I would end up being the front runners by the end.

Post Competition Analysis
So, as I've been saying throughout I think that my strategy was poor for this competition. At the beginning I envisioned it starting to work properly much earlier in the process. I'm currently set to make hundreds of thousands of gold on this server, but getting to that position took longer than I expected. If I were to do this competition again, I'd have reused the strategy I used in my competition with Selltacular for getting in the gem market, that is, hiring out JCs and Alchemists to do my dirty work for me. I thought that given that this competition was roughly twice as long, that it would pay off in the long run to level the professions myself, but I do not believe that it has. The only way I could say that it has was that Tiger Opals were in the 40-50g range almost constantly on this server, which still leaves avenues for profits, but really cuts down on the margins. Being able to prospect for Vermilion Onyxes and cheap Tiger Opans was almost a must. If they actually sold for 40-50g people were making more than a stack of Ghost Iron was going for in just that one uncut gem. Good for them, but that's ridiculous.

Throughout the competition sales were a bit slower than I had imagined they'd be. I don't know if it's the size of the server, or perhaps the amount of big players in the market, but I dabble on a different medium pop server, and my turnover rate is much higher, and I went in expecting the same on this one. Managing everything from one toon was a bit of a pain as well, keeping armor auctions and gems/enchants/xmutes all on one character is a bit of a juggling act, but worked out okay in the end.

Hindsight is 20/20
If I were to do the competition again, I would probably change how I approached the whole thing. I like the way Lakza approached things, getting a few levels then flipping what they could. To me though that'd get boring, but is probably a much better short term strategy. Overall I think the biggest hurdle in this competition was building up quickly, and I was not as successful at that as I'd have liked to been, but now have a solid base to build upon on that server, if I indeed choose to do so. I've been talking with Lakza and he's expressed interest in writing an analysis post from his perspective on my blog, so I'm pretty excited about that, look for it later this month!

Guessing Competition
Probably most disappointing was my guessing competition. I had a lot of guesses in the 200k range, and man did I not live up to that. The winner is of course @discorddave with the following guess:


For a while I was thinking I'd end up with less in this month long competition than I did in my 2 week competition, but thankfully that was not the case. So, congrats again to @discorddave, to whom I've already sent a DM on twitter to for the prize!