I've seen some crazy speculation in the past few days, on the profit of the Sky Golem, which will be craftable for the first time Wednesday on US servers, and Thursday on EU.  The most ridiculous prediction I've seen came from the reddit gold making community, where someone said they thought they'd be able to sell their Sky golem for "at least 500k".  With a mentality like that, you're setting yourself up for disappointment. 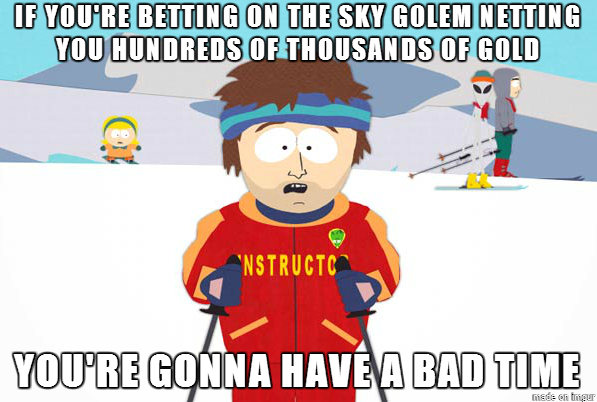 Now this isn't to say the thing isn't going to be profitable. Oooooh it will be. But let's look at the numbers for a moment shall we?
Costs
Here are the Market Price to make one across US servers.

Well well well, not exactly a cheap investment, but no bank breaker either, at least for most of my audience.  This (or more accurately your own servers average) is what you should value your cost as.

Maximizing Profit
If you have other crafting CDs (Tailoring/BS/LW) and crafted belts, surely you were disappointed with the prices.  Don't expect Sky Golems to be any less cutthroat.  That being said there are 2 things that are worth considering with the Golem:


So what's the bottom line?  My thoughts are this, opinions may vary, servers as well.  First of all you have to consider that not everyone's going to be able to craft this thing on day 30.  I missed 2 days already myself, being the casual gold maker that I am.

***Side Tangent: I did a flex raid a few days ago where one of the guys I was raiding with got a Jard's pattern for the first time and asked what it was for.  He was also that guy who had to switch to an alt to get gold for repairs later in the raid.  Point being, there's all sorts of people who play this game and not every Engineer is going to be making this, but as far as love for professions go, Engineers are undoubtedly the most dedicated and most of them will be ready to craft within a few days of Day 30.***

Second, know that if you are ready on Day 30, you may be among a smaller crowd than Day 31 or Day 32.  Getting a deal in trade for 1-5k less than the AH may be a solid bet.  If you can't sell it within the first few days, don't drop your price by 20,000g or some ridiculous number just because the market is over saturated.  I expect these to at least have a small pricing trend like the Darkmoon Faire trinkets did early in the expansion.  Week of the Faire?  Everyone is turning in their decks and undercutting each other like crazy.  Two weeks after Faire?  Higher profits for those with a little patience.  Now this may vary on your server due to a lot of factors (size being the main one), but I'd expect to see a similar pricing trend for Sky Golems, so don't dump it for super cheap this week if prices take a dive! Hold on to it maybe 10-14 days, and see what the market does.

I hoped this helped shed some light on the pricing for Sky Golems, and if you'd like to rampantly speculate on pricing in the comment section, feel free.

WAIT WAIT WAIT...Phat you didn't give us a price!

Go for as much as you can when you can log on.  If you're the first to post it and want to try for a half a million gold, by all means go for it.  Who am I to say dreams don't come true?

The price is going to vary LARGELY by server. So, damn much. You should know how your server will react to these things better than I, just keep your bottom line in mind when selling and you can't lose.  Finally, I will let you all know that my goal is the 150-200k range.  I have NO idea what my market will do tomorrow, and I have to wait 2 days anyway, so I'll have a front row seat.  That being said do not expect the same on your server at all, manage your expectations people!